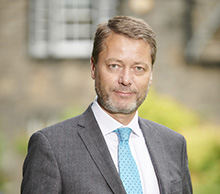 Stuart joined Walker Foster straight from school in 1982. He trained as a Legal Executive and progressed to Solicitor in 2005 when in the same year he became a partner in the firm.

Stuart specialises in both residential conveyancing and private client matters. He has extensive knowledge of all issues in these areas including agricultural and business elements and is expert on inheritance tax planning. Over the years he has headed and grown both departments before handing over the reins to younger talent within the firm!

He initially worked from our Barnoldswick office where he was trained by Brian Walker, one of our founding solicitors. He opened our Silsden office in 2000 and has grown that office from a single lawyer office to what is now a four-lawyer office. He is familiar with the town’s local people and businesses. He is well connected and respected in Silsden and across much of the Aire Valley and has established strong relationships with many local estate agents, financial advisors and other local businesses.

Community is important to Stuart, and he proudly supports a number of local charities and community projects, which often includes providing free legal advice and assistance where this is deserved.

Outside of the office Stuart enjoys spending time with his (long suffering) wife, their two children and six grandchildren. He loves travelling to far away places. He runs, regularly but slowly, to balance his liking for good food and has supported Liverpool FC since childhood. He has fond memories of standing and chanting in the Kop End terrace well before ‘seat only’ stadiums. He admits to disliking any team followed by any other director for the firm! He likes classic cars but is no mechanic!