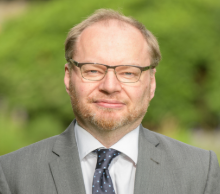 Darren is a solicitor in our Wills and Probate department having joined Walker Foster in April 2020. Darren was a Partner in a firm in Norfolk for nearly 20 years before taking a career break. Prior to his legal career, Darren worked in industry for 8 years before taking the Law Society Finals in York and qualifying in 1996. Initially, Darren specialised in litigation and conducted high-value cases in the East Midlands. Upon joining a private client firm in Norfolk in the late 90’s he began to specialise in Wills and Probate, Court of Protection and Disputed Wills work and has been described in The Legal 500 as “very senior and very experienced”.

Darren recently relocated to Yorkshire and spends his free time walking in the Dales and the Highlands of Scotland. He also travels extensively and has a particular interest in Scandinavia and Japan.